After updating the Galaxy Buds Live with new features borrowed from the latest Galaxy Buds Pro earbuds last week, Samsung is now turning its attention towards the older Galaxy Buds+ and is releasing a similar firmware update with extra features in tow.

The update’s highlight is the addition of Auto Switch. It debuted with the latest Galaxy Buds Pro earbuds as a new feature that allows users to seamlessly switch between different audio sources on the fly, as long as those audio sources are compatible Samsung smartphones or tablets running One UI 3.1.

In addition to Auto Switch, the latest firmware update also adds the Buds menu control to Bluetooth settings. This makes it easier for users to adjust the earbuds’ settings from the Bluetooth page as opposed to the dedicated Galaxy Wearable app. The Hearing aid feature, however, is not included in this latest release.

As always, new firmware updates can be downloaded for the Galaxy Buds+ via the Galaxy Wearable app that’s running on the connected smartphone. You can identify the new update by firmware version R175XXU0AUB3. The package weighs a little over 1.40MB and the changelog also mentions the usual system stability and reliability improvements. 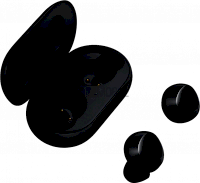