Samsung and Apple are the only two smartphone OEMs in the USA to have experienced positive results throughout the last quarter of 2020. The global smartphone market has declined by roughly 2% last year due to the economic changes caused by COVID-19, and in the USA alone, the segment saw a 6% year-on-year decline in Q4 2020, with most OEMs experiencing massive losses.

The good news is that Samsung wasn’t one of these OEMs. In fact, Samsung saw a 5% year-on-year increase in Q4 despite the uncertain climate, and Apple has enjoyed an even higher 14% YoY boost. Meanwhile, LG’s influence dropped by 12% but it wasn’t as bad as ZTE with a sharp 83% decline, or even Google who has recorded a 50% drop in the final quarter of the year compared to 2019.

The Galaxy S20 FE 5G comes to the rescue

The main reason why Samsung was able to pull ahead of most of its rivals and record positive results in Q4 2020 was the launch of the Galaxy S20 FE, reveals Counterpoint Research. It came at the perfect time for prospective buyers who were looking to buy a flagship-grade phone at a non-flagship price, and even the 256GB variant was reportedly fairly successful thanks to its sub-$1,000 price.

But while the Galaxy S20 FE has helped Samsung in Q4, the Galaxy S21 series might not have the same effect this quarter, especially given Apple’s current momentum. Analysts believe that Samsung will have fewer opportunities in Q1 2021, so perhaps the gap between it and Apple will widen further. 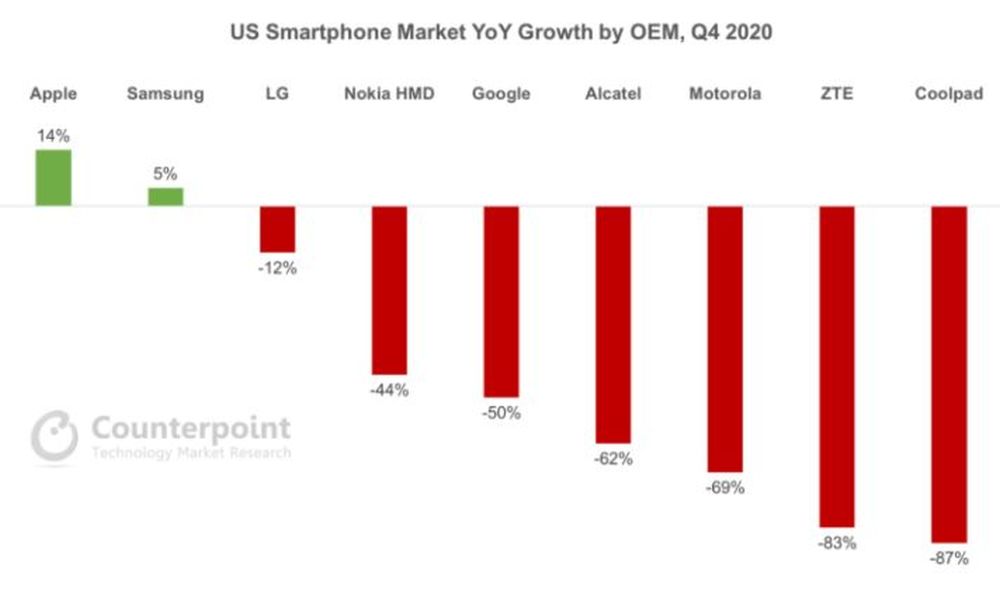