The Galaxy A02 (SM-A022F/DS) has received certification from Thailand’s regulatory authority NBTC. The certification also reveals the phone’s marketing name (Galaxy A02) and that the phone supports 4G LTE connectivity and has a dual-SIM card slot. It was previously revealed that the upcoming budget smartphone from Samsung would feature 32GB and 64GB variants, and it will be available in at least three colors: black, blue, and red. It features Bluetooth 4.2 connectivity, as revealed by its Bluetooth certification.

As per previous reports, the Galaxy A02 features a MediaTek MT6739WW processor and 2GB RAM. It runs Android 10 out of the box, which means it will feature One UI 2.x. It will feature a massive, 5,000mAh battery, which is a huge jump from the Galaxy A01’s 3,000mAh battery. It is also rumored to feature a 5.7-inch Infinity-V display and a 13MP+2MP dual-camera at the rear. 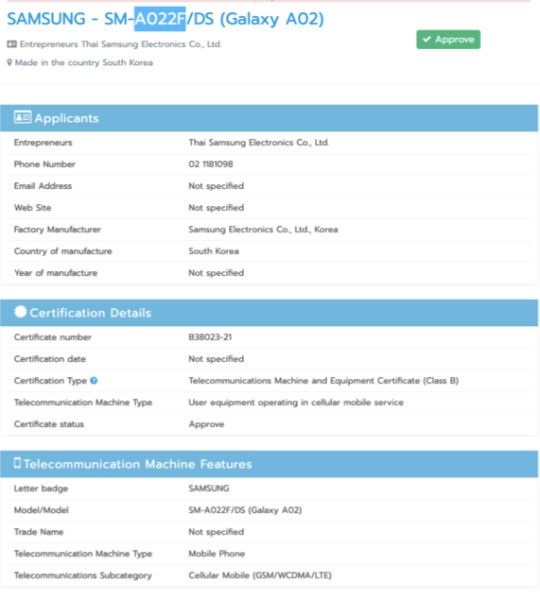