It’s time for Samsung’s most affordable 5G phone of 2021 – the Galaxy A32 5G – to get back in the limelight thanks to a fresh leak. The device was envisioned in fan renders before, but this time the phone’s exterior design was fully exposed by official press renders leaked via WinFuture. And judging by this fresh image gallery, the Galax A32 5G could be one of the better-looking mid-range phones to come out of Samsung’s factory gates in recent years.

That might be true at least for the back panel because there’s nothing special happening on the opposite side. The Galaxy A32 5G has an Infinity-V display with relatively thick bezels, and it looks more or less the same as Samsung’s other phones that make use of this particular display design. However, the back panel is a lot more unique.

Steering away from conventional camera bumps and cutouts

The Galaxy A32 5G is equipped with four cameras and an LED flash, but each module has its own separate cutout as opposed to all being bunched up inside a rectangular camera bump. The cameras still protrude from the back panel so the phone won’t sit completely flat when resting on a table, but at least the new camera bump design comes across as sincere. This is a modest camera setup, after all, and the camera housing doesn’t have to make a statement.

According to preliminary specs, the Galaxy A32 5G should have a 6.5-inch LCD and a 48MP main camera along with an ultra-wide shooter, a macro lens, and a depth sensor. The phone is said to be powered by a MediaTek Dimensity 720 chipset with an integrated 5G modem and feature 4GB of RAM as well as 64GB or 128GB of internal storage. Other details include a side-mounted fingerprint scanner and a 3.5mm headphone jack at the bottom.

Pricing and availability details remain unknown but the phone might be introduced in the coming weeks, seeing how the official press renders are already out. Do you like this new design direction adopted by the Galaxy A32 5G or do you prefer the larger camera cutouts? Leave a comment below. 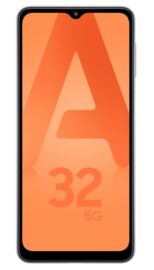 The post Galaxy A32 5G could have the most gorgeous back of any mid-range phone appeared first on SamMobile.