The LTE-only variant of the Galaxy A72 will miss out on more than just 5G support, newly emerged technical information suggests. A benchmark listing uncovered by GalaxyClub earlier today reveals that Samsung’s upcoming device designated with model number SM-A725F features Qualcomm’s Snapdragon 720G system-on-a-chip. Meaning we’re looking at a blatant downgrade compared to the Galaxy A71 which debuted in January with an older – ye noticeably more capable – Snapdragon 730G.

Meanwhile, the Galaxy A72 5G (SM-A725B) is likely to sport the workhorse-worthy Snapdragon 750G silicon. If that sounds familiar, it’s because we’re already expecting an identical split between the Galaxy A52 and Galaxy A52 5G. And no, there’s no indication of an Exynos configuration being planned for either pair of devices. Whereas the 5G variant of this year’s Galaxy A71 utilized the Exynos 980.

Will these likely Galaxy A72 specs suffice?

Meanwhile, it would appear Samsung isn’t developing an LTE-only Galaxy A32 and might only launch this modest mid-ranger in a 5G-enabled specification. The next generation of the Galaxy A series is expected to launch early next month without too much fanfare. Samsung will presumably introduce it separately from its upcoming Galaxy S21 flagships. 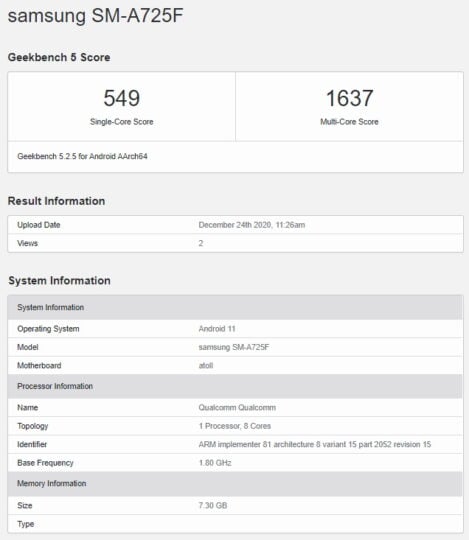 The post More Galaxy A72 specs emerge, including a downgraded Snapdragon chip appeared first on SamMobile.