Samsung’s foldable smartphone business maintained its momentum throughout 2020 with another record number of device shipments. Out of 2.8 million foldable smartphones shipped this year, the South Korean company accounted for more than 2.04 million, or 73%. That’s according to a new market report from CounterPoint Research.

As nearly three out of four foldable smartphones shipped this year were Samsung-made, Samsung seems to be well-positioned to continue this growth in the immediate future. Its latest achievement happened on the back of three devices in total: the Galaxy Z Flip, Galaxy Z Flip 5G, and the Galaxy Z Fold 2. That’s not accounting for collector’s models such as the Galaxy Z Fold 2 Thom Browne Edition which had extremely limited production runs.

The newly released report also predicts that the global market for flexible-display smartphones will grow to 17 million device shipments by 2022. Given that spike and the overall lack of competition, Samsung’s title of the world’s largest foldable smartphone manufacturer is unlikely to be challenged anytime soon. For added context, its currently most serious rival is Huawei, a company whose mobile unit has been effectively crippled outside of China for a while now.

What’s more, Samsung intends to ramp up its foldable smartphone output going into 2021. According to one recent report out of its home country, the chaebol will be launching four such devices throughout the next year. All things considered, Samsung should be able to sustain its momentum in this nascent market for the time being. Especially if it manages to leverage the economies of scale to finally bring the average price of foldable smartphones down to the typical flagship territory, something it has already promised. 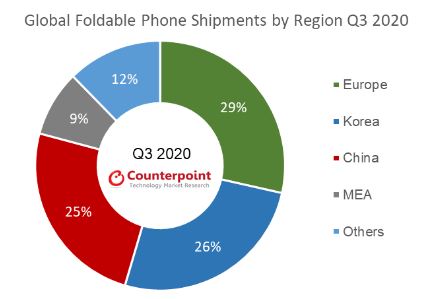